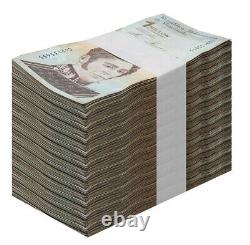 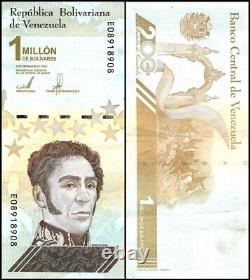 This Venezuela 1 Million Soberano banknote was issued by the Central Bank of Venezuela, dated 2020. The note was released to commemorate the bicentennial anniversary of the Battle of Carabobo. Featured on the obverse is Venezuelan revolutionary leader Simon Bolivar in his military uniform. The reverse of the note is a depiction of the Battle of Carabobo in 1821. The paper bill is equipped with a windowed security thread that has a demetallized BCV. It also has a watermark that reveals Simon Bolivar and an electrotype BCV. This banknote measures 156 x 69 mm and is in used condition.

This item is in the category "Coins & Paper Money\Paper Money: World\South America". The seller is "banknoteworld" and is located in this country: US.