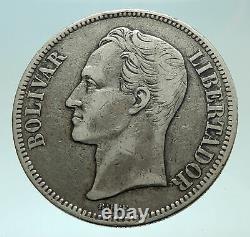 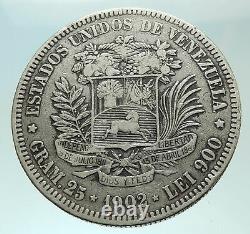 25 LEI 900, Coat of arms with legend at top. Weight, date and fineness at bottom. BOLÍVAR LIBERTADOR BARRE, Bust left, flanked with legend and engraver's name at base.

Simón José Antonio de la Santísima Trinidad Bolívar y Palacios Ponte y Blanco (24 July 1783 - 17 December 1830), commonly known as Simón Bolívar or Simon Bolivar , was a Venezuelan military and political leader. Bolívar played a key role in Latin America's successful struggle for independence from the Spanish Empire, and is today considered one of the most influential politicians in the history of the Americas. Following the triumph over the Spanish monarchy, Bolívar participated in the foundation of the first union of independent nations in Hispanic-America, a republic, now known as Gran Colombia, of which he was president from 1819 to 1830. Bolívar is regarded as a hero, visionary, revolutionary, and liberator in Hispanic-America. During his lifetime, he led Venezuela, Colombia (including Panama at the time), Ecuador, Peru (together with Don José de San Martín), and Bolivia to independence from the Spanish Empire. Admirers claim that he helped lay the foundations for democracy in much of Latin America. Venezuela , officially called the Bolivarian Republic of Venezuela Spanish: República Bolivariana de Venezuela , is a country on the northern coast of South America. Venezuela's territory covers around 916,445 km. (353,841 sq mi) with an estimated population around 29,100,000. Venezuela is considered a state with extremely high biodiversity, with habitats ranging from the Andes Mountains in the west to the Amazon Basin rainforest in the south, via extensive llanos plains and Caribbean coast in the center and the Orinoco River Delta in the east.

Venezuela was colonized by Spain in 1522 amid resistance from indigenous peoples. In 1811, it became one of the first Spanish-American colonies to declare independence, which was not securely established until 1821, when Venezuela was a department of the federal republic of Gran Colombia. It gained full independence as a separate country in 1830.

During the 19th century, Venezuela suffered political turmoil and autocracy, remaining dominated by regional caudillos (military strongmen) until the mid-20th century. Since 1958, the country has had a series of democratic governments. Economic shocks in the 1980s and 1990s led to several political crises, including the deadly Caracazo riots of 1989, two attempted coups in 1992, and the impeachment of President Carlos Andrés Pérez for embezzlement of public funds in 1993. A collapse in confidence in the existing parties saw the 1998 election of former coup-involved career officer Hugo Chávez and the launch of the Bolivarian Revolution, beginning with a 1999 Constituent Assembly to write a new Constitution of Venezuela. Venezuela is a federal presidential republic consisting of 23 states, the Capital District (covering Caracas), and federal dependencies (covering Venezuela's offshore islands). Venezuela also claims all Guyanese territory west of the Essequibo River, a 159,500-square-kilometre (61,583 sq mi) tract dubbed Guayana Esequiba or the Zona en Reclamación (the "zone being reclaimed"). Venezuela is among the most urbanized countries in Latin America; the vast majority of Venezuelans live in the cities of the north, especially in the capital, Caracas, which is also the largest city in Venezuela. Since the discovery of oil in the early 20th century, Venezuela has the world's largest oil reserves and been one of the world's leading exporters of oil.

Previously an underdeveloped exporter of agricultural commodities such as coffee and cocoa, oil quickly came to dominate exports and government revenues. The 1980s oil glut led to an external debt crisis and a long-running economic crisis, in which inflation peaked at 100% in 1996 and poverty rates rose to 66% in 1995 as (by 1998) per capita GDP fell to the same level as 1963, down a third from its 1978 peak. The recovery of oil prices after 2001 boosted the Venezuelan economy and facilitated social spending which significantly reduced economic inequality and poverty, although the fallout of the 2008 global financial crisis caused a renewed economic downturn. In February 2013, Venezuela devalued its currency due to the rising shortages in the country.

World-renowned expert numismatist, enthusiast, author and dealer in authentic ancient Greek, ancient Roman, ancient Byzantine, world coins & more. Ilya Zlobin is an independent individual who has a passion for coin collecting, research and understanding the importance of the historical context and significance all coins and objects represent. Send me a message about this and I can update your invoice should you want this method. Getting your order to you, quickly and securely is a top priority and is taken seriously here.

Great care is taken in packaging and mailing every item securely and quickly. What is a certificate of authenticity and what guarantees do you give that the item is authentic? You will be very happy with what you get with the COA; a professional presentation of the coin, with all of the relevant information and a picture of the coin you saw in the listing. Additionally, the coin is inside it's own protective coin flip (holder), with a 2x2 inch description of the coin matching the individual number on the COA. Whether your goal is to collect or give the item as a gift, coins presented like this could be more prized and valued higher than items that were not given such care and attention to.

When should I leave feedback? Please don't leave any negative feedbacks, as it happens sometimes that people rush to leave feedback before letting sufficient time for their order to arrive.

The matter of fact is that any issues can be resolved, as reputation is most important to me. My goal is to provide superior products and quality of service. How and where do I learn more about collecting ancient coins? Visit the Guide on How to Use My Store. For on an overview about using my store, with additional information and links to all other parts of my store which may include educational information on topics you are looking for.

The item "1902 Freemason President Simon Bolivar VENEZUELA Founder Silver Coin i75973" is in sale since Tuesday, February 26, 2019. This item is in the category "Coins & Paper Money\Coins\ World\South America\Venezuela". The seller is "highrating_lowprice" and is located in Rego Park, New York. This item can be shipped worldwide.